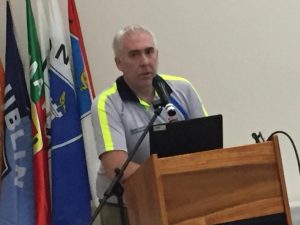 The 2017 USGAA Convention was hosted by the Coastal Virginia GAA club at an unseasonably chilly Virginia Beach. Making the journey by plane, train, or automobile, more than 100 delegates from clubs across the United States convened on the Four Points Hotel Friday night to ask questions, have their say, participate in big decisions, and elect a new committee for the coming year. One of the longest distances traveled was by Tom Lagan from Tacoma Rangers in Washington State. The Belfast native made the almost 3,000 mile journey, and having been nominated and appointed for the open Registrar position, made the return journey a new member of the committee.

Irish Ambassador to the USA, Dan Mulhall, addressed the gathering to open Saturday’s proceedings, and there were presentations made on games development by Rob Tierney (Pittsburgh) and Colm Egan (Chicago). When motions were addressed two of the most significant decisions made very much focused on development at grass roots level. The stock of minor footballers and home based ladies around the country rose after 2 motions passed. The first mandates that men’s junior teams field a minimum of 2 players who have come through the youth systems. This motion also contains a provision that in 2020 the same mandate will apply to men’s senior football clubs. A second motion submitted by the Charlotte James Connolly club also passed that reduced the number of sanction players allowed for ladies football teams at all levels.

Two positions went to a vote, incumbent secretary Paul Keane (San Jose) was reelected while Paddy McDevitt (Boston-Northeast) was elected Central Council Delegate.   The 2018 finals will be hosted by Philadelphia on Labor Day weekend, and final act was to find a venue to the 2018 convention. Chicago duly volunteered to host and so it will be Chicago a year from now to reflect on the past season and look ahead to the future.