Gaelic football was first codified in 1887, although it has purported links to older varieties of football played in Ireland. A rough-and tumble form of Gaelic football was common throughout the middle ages, similar versions of which abounded throughout Europe and eventually became the forebears of both soccer and rugby. Though references to Irish Football are practically non-existent before the 1600s the earliest records of a recognized precursor to modern Gaelic football date from a game in County Meath, Ireland in 1670, in which catching and kicking the ball were permitted.

The game is now played all over the world, and is growing in popularity every year. There sport has been played in the United States ever since Irish emigrants first came to its shores.

The objective of the sport is to score by kicking or punching the ball into the other team’s goals (3 points) or between two upright posts above the goals and over a crossbar 2.5 metres (8.2 ft) above the ground (1 point).

Players advance the football, a spherical leather ball, up the field with a combination of carrying, bouncing, kicking, hand-passing, and soloing (dropping the ball and then toe-kicking the ball upward into the hands). In the game, two types of scores are possible: points and goals. A point is awarded for kicking or hand-passing the ball over the crossbar, signalled by the umpire raising a white flag. A goal is awarded for kicking the ball under the crossbar into the net, signalled by the umpire raising a green flag.

A Gaelic pitch is similar in some respects to a rugby pitch but larger. The grass pitch is rectangular, stretching 130–145 metres (142–159 yards) long and 80–90 m (87–98 yd) wide. There are H-shaped goalposts at each end, formed by two posts, which are usually 6–7 metres (20–23 feet) high, set 6.5 m (21 ft) apart, and connected 2.5 m (8.2 ft) above the ground by a crossbar. A net extending behind the goal is attached to the crossbar and lower goal posts. The same pitch is used for hurling; the GAA, which organises both sports, decided this to facilitate dual usage. Lines are marked at distances of 13 metres, 20 metres, and 45 metres (65 m in hurling) from each end-line. Shorter pitches and smaller goals are used by youth teams.

Teams consist of fifteen players (a goalkeeper, two corner backs, a full back, two wing backs, a centre back, two mid fielders, two wing forwards, a centre forward, two corner forwards and a full forward) plus up to fifteen substitutes, of which five may be used. Each player is numbered 1–15, starting with the goalkeeper, who must wear a jersey colour different from that of his or her teammates. Up to fifteen substitutes may be named on the team sheet, number 16 usually being the reserve goalkeeper.

Teams consist of fifteen players: a goalkeeper, three full backs, three half backs, two midfielders, three half forwards and three full forwards (see diagram). The panel is made up of 24–30 players and five substitutions are allowed per game. An exception can now be made in the case of a blood substitute being necessary

The game is played with a round leather football made of 18 stitched leather panels, similar in appearance to a traditional volleyball (but larger), with a circumference of 68–70 cm (27–28 in), weighing between 480–500 g (17–18 oz) when dry. It may be kicked or hand passed. A hand pass is not a punch but rather a strike of the ball with the side of the closed fist, using the knuckle of the thumb.

There are three main types of fouls in Gaelic Football, which can result in the ball being given to the other team, a player being cautioned, a player being removed from the field, or even the game being terminated.

The following are considered technical fouls (“fouling the ball”):

A dissent foul is a foul where a player fails to comply with the officials’ judgment and/or instructions. The player can be cautioned (shown a yellow card), ordered off the pitch without a substitute (red card), the free kick placement moved 13 m further down-field, or in certain circumstances, the game can be terminated. The following are considered dissent fouls:

If the ball goes over the crossbar, a point is scored and a white flag is raised by an umpire. A point is scored by either kicking the ball over the crossbar, or fisting it over, in which case the hand must be closed while striking the ball. If the ball goes below the crossbar, a goal, worth three points, is scored, and a green flag is raised by an umpire. A goal is scored by kicking the ball into the net, not by fist passing the ball into it. However, a player can strike the ball into the net with a closed fist if the ball was played to him by another player or came in contact with the post/crossbar/ground prior to connection. The goal is guarded by a goalkeeper. Scores are recorded in the format Goal Total-Point Total. To determine the score-line goals must be converted to points and added to the other points. For example, in a match with a final score of Team A 0–21 Team B 4–8, Team A is the winner with 21 points, as Team B scored only 20 points (4 times 3, plus 8).

The level of tackling allowed is less robust than in rugby.

Shoulder to shoulder contact and slapping the ball out of an opponent’s hand are permitted, but the following are all fouls:

A football match is overseen by up to eight officials:

The referee is responsible for starting and stopping play, recording the score, awarding frees and booking and sending off players.

Linesmen are responsible for indicating the direction of line balls to the referee.

The fourth official is responsible for overseeing substitutions, and also indicating the amount of stoppage time (signalled to him by the referee) and the players substituted using an electronic board.

The umpires are responsible for judging the scoring. They indicate to the referee whether a shot was: wide (spread both arms), a 45 m kick (raise one arm), a point (wave white flag), square ball (cross arms) or a goal (wave green flag). A disallowed score is indicated by crossing the green and white flags. 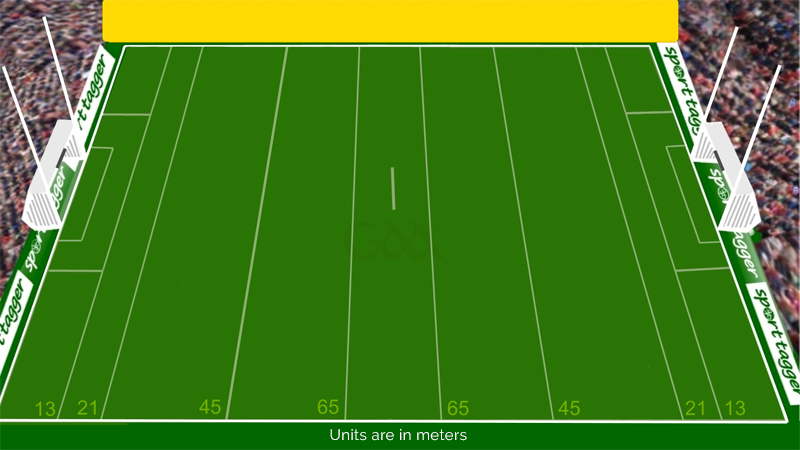 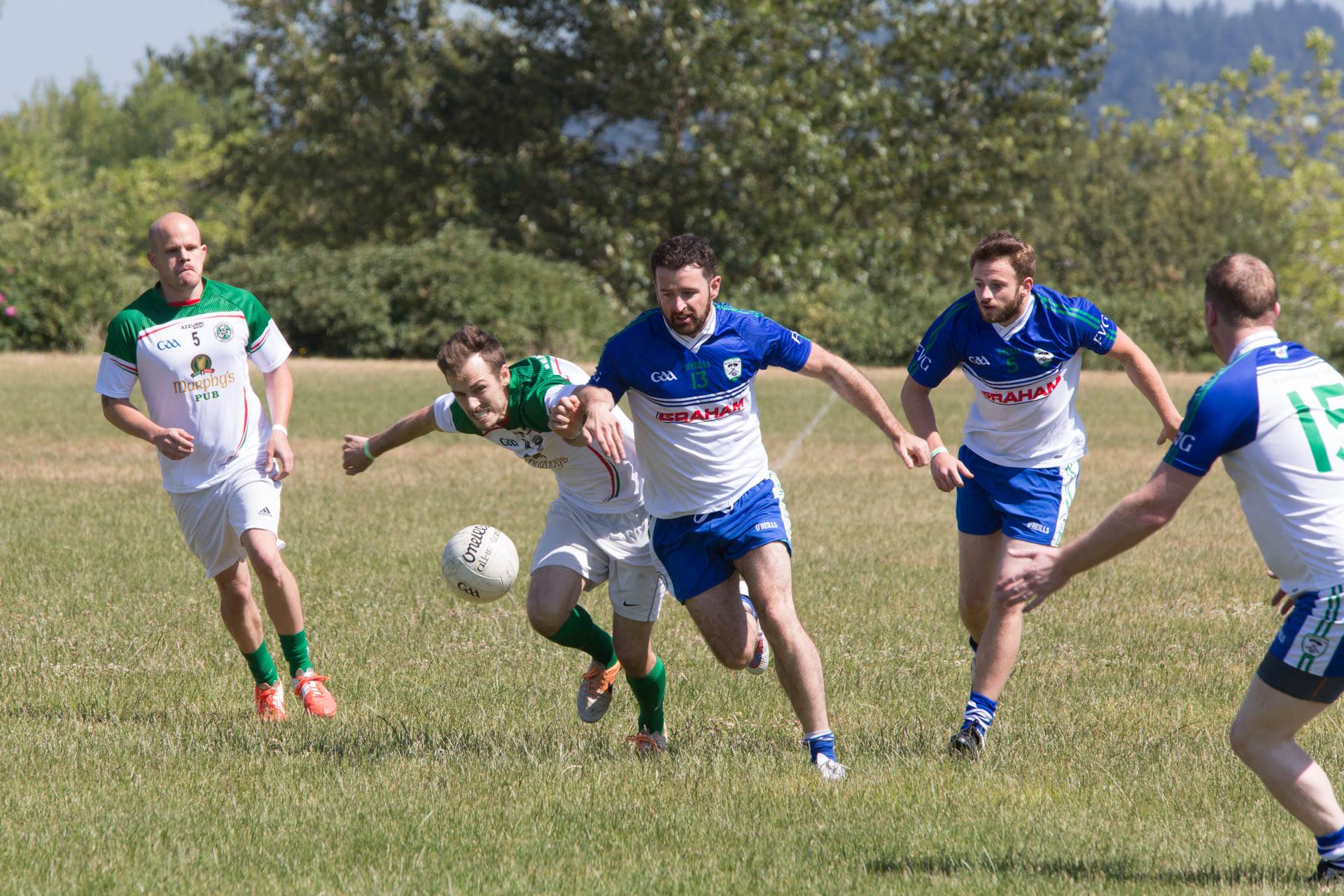 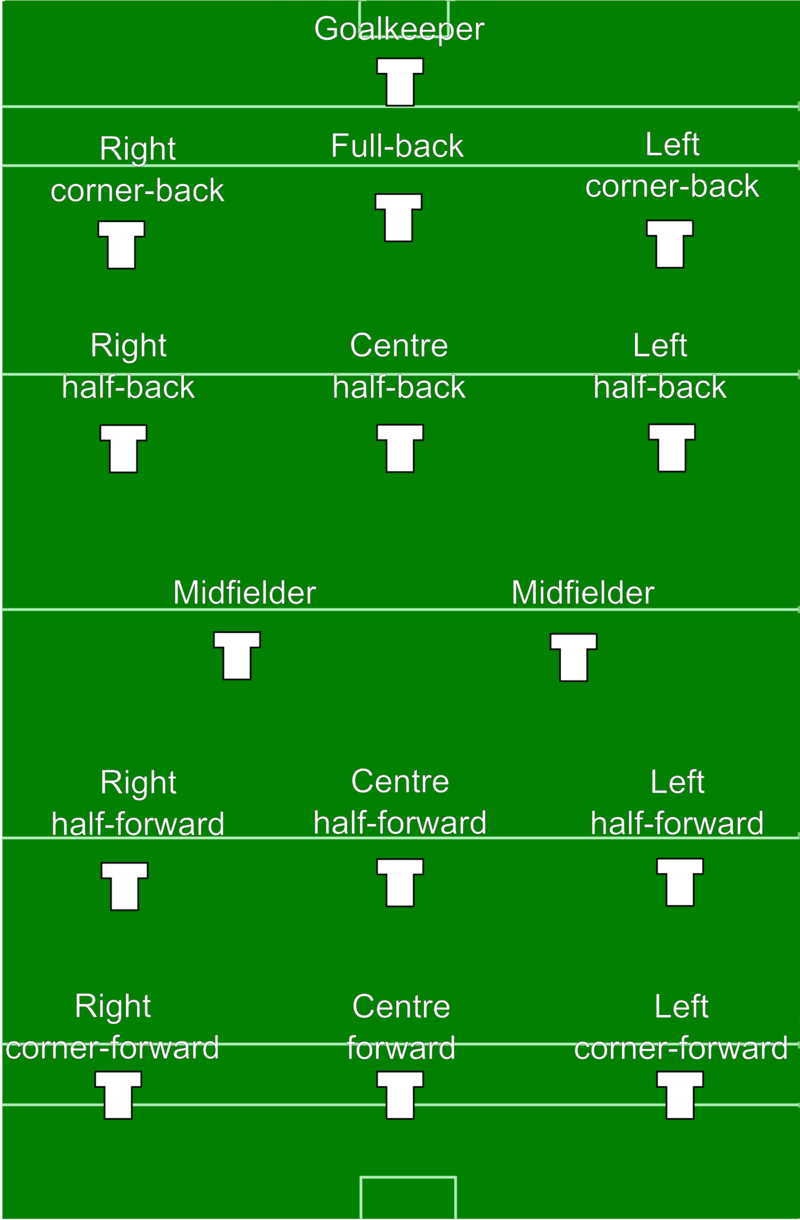 Most of the rules of ladies’ gaelic football are the same as those for men’s game. The main differences are: