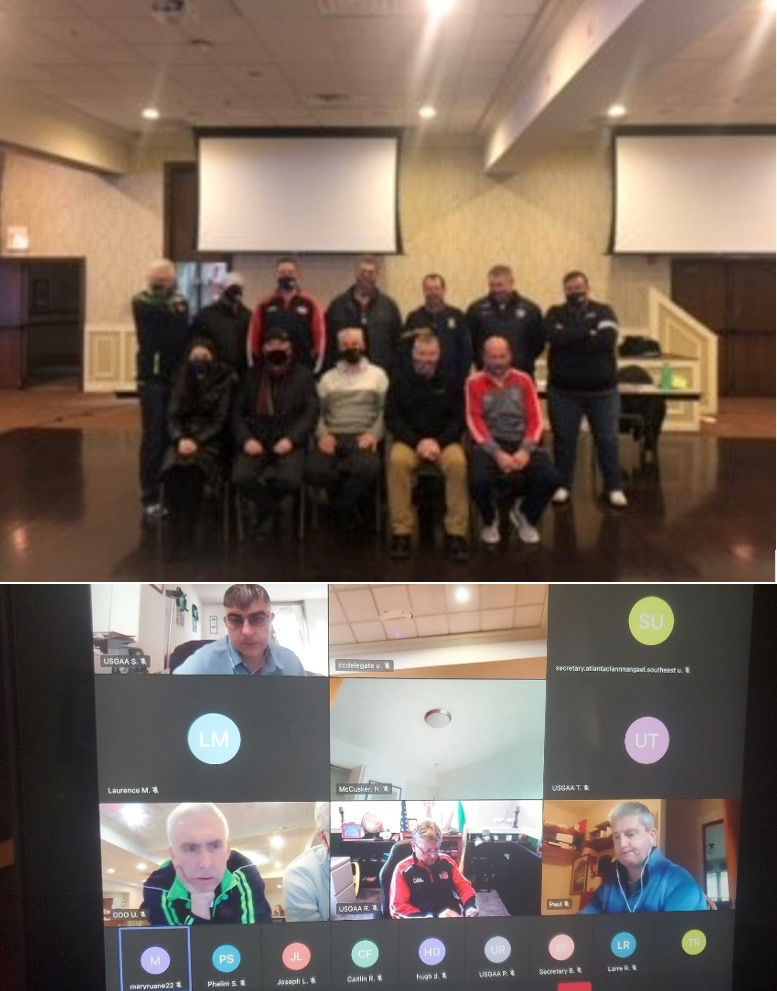 On January 30, 2020, USGAA closed out one of the most unconventional years with a convention to match. Usually, this is one of the few times a year the organization has delegates from all over the country meet to discuss the prior year- highlighting games and other activities but this year only some attendees were at Gaelic Park in Chicago, IL, while most attendees were forced to attend virtually due to COVID restrictions for their specific areas.

Overall, the day was still as successful as always. It started with an introduction from Niall Erskin, World GAA Chair and was followed by the annual reports and elections before lunch. The 2021 USGAA Board Officers is as follows:

After lunch there was a workshop with Munster County, Pat O’Shea and divisional chairs and secretaries to discuss strategy for 2021. A few key takeaways from the discussion with Pat O’Shea were:

2021 is going to be a key year for USGAA and it will be crucial to get our teams on the field. He recognized the great work USGAA already does with their volunteers and discussed the importance of finding roles and duties for those who have supported in the past.

Pat O’Shea suggested each division do a “health/gut” check to determine:

All you need is love… and the GAA

Check out this series of stories on how our eventually found more than just love for the GAA.

Oddly enough, our GAA love story begins with…cheese. On a damp, sun-breaky Portland day in April of 2012 where the Seattle teams were playing friendlies against Portland. I (Vanessa) was the idiot rookie who hadn’t packed food to eat in between matches. Ranko (who didn’t know me at the time), was next to me and offered me an extra string cheese that she had. As we’ve reminisced about this meeting, it has become very clear that Ranko thought there was something wrong with me for taking cheese from a stranger. It never crossed my mind to not take the offered cheese – but then again I’m from Wisconsin, where cheese is sacred. Looking back, it seems that our pairing was destined to be!

It wasn’t immediate, however. Ranko was a Gaelic Footballer, and I was a Camogie Player – it’s hard to cross that aisle. We wouldn’t become friends until later that year, when our different friend groups on the Gaels would intermingle. After that, we were hard to separate, coming up with new shenanigans whenever we could (Have you ever tried “flaming hurling”??) and even pulling each other to play in the other’s chosen sport. Our friends in the GAA seemed to know that we were more than friends before we ever did. It took us a few years, but we eventually figured it out :).

We’ve had a pretty wild ride as a couple in the GAA. In 2016, our Camogie team won the USGAA Junior Championship. In 2018, we sealed the deal and got married in front of our loved ones, with an archway of crossed hurls ushering us into married life. In 2019, we had the amazing opportunity to play on the USA Warriors team in the World Games, and made it all the way to Croke Park! With same-sex marriage being relatively new in Ireland, we aren’t sure if there is anyone else out there that has shared the honor of playing a match at Croke Park with their partner. If anyone knows, please let us know!

The GAA means so much to the both of us. Our own story would not exist without the amazing people we’ve met through these sports who helped bring us together. We’ve also had the pleasure of seeing multiple friends meet their loved ones on the team and go off to get married and start families.

And to think. It all started with cheese!

Alli and John Kenney first met at the Twin Cities Northstar Tournament in Summer of 2015, and since then their love story has revolved around GAA. During that time, Alli played for TCRE Camogie and John played for Madison Hurling, so the only times they saw each other after that day was at Nationals 2015 in Chicago and Nationals 2016 in Seattle.

That is until the Madison Midwest Tournament in 2016 when they decided to start dating long distance. Fast forward two years, when in 2018 John proposed to Alli during that very same tournament during the Awards Ceremony.

Alli and John are now married and living in Madison, Wisconsin where they are both heavily involved in both Hurling/Camogie and Gaelic Football in Madison. John now coaches the Camogie team that is starting to grow in Madison, and Alli is still attempting to learn to kick a Gaelic football straight after moving to a dual code city. 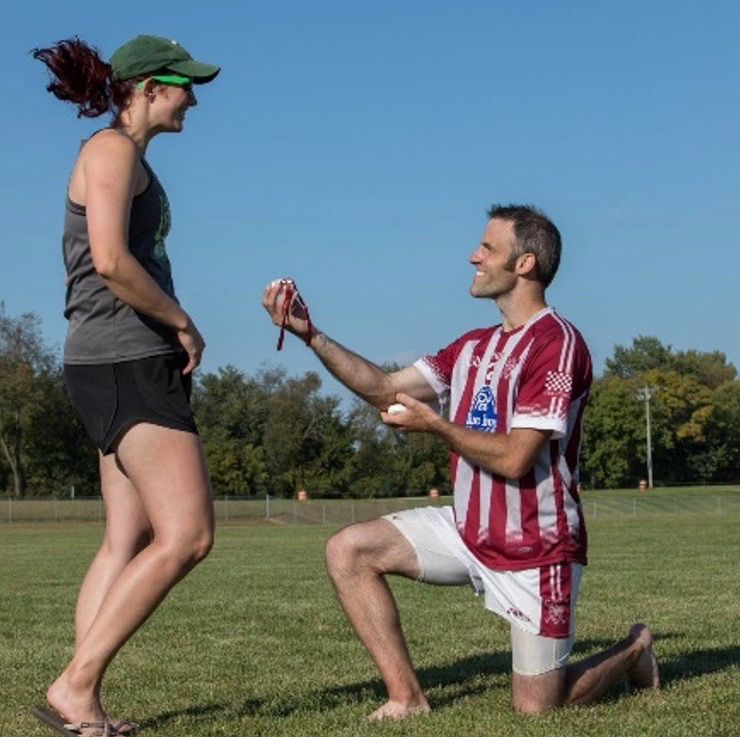 Meghan and Tom Crandall met in 2011, and are both members of the Twin Cities Robert Emmets Hurling Club. During the 2011 spring and summer seasons they both went relatively unnoticed by each other. It wasn’t until after Nationals in San Francisco that things took off. Their first official date was actually pucking around at a local park. They now have been married for six years and have 2 children. Their favorite GAA memories are of course, Nationals. Meghan has cheered on Tom through 3 championship games. Tom has cheered for Meghan during her 5 championship games and 3 National wins. He also cheered from MN while watching her win at Croke Park during the World Games in 2019. Hurling has consumed their ten years together, and they wouldn’t have it any other way. 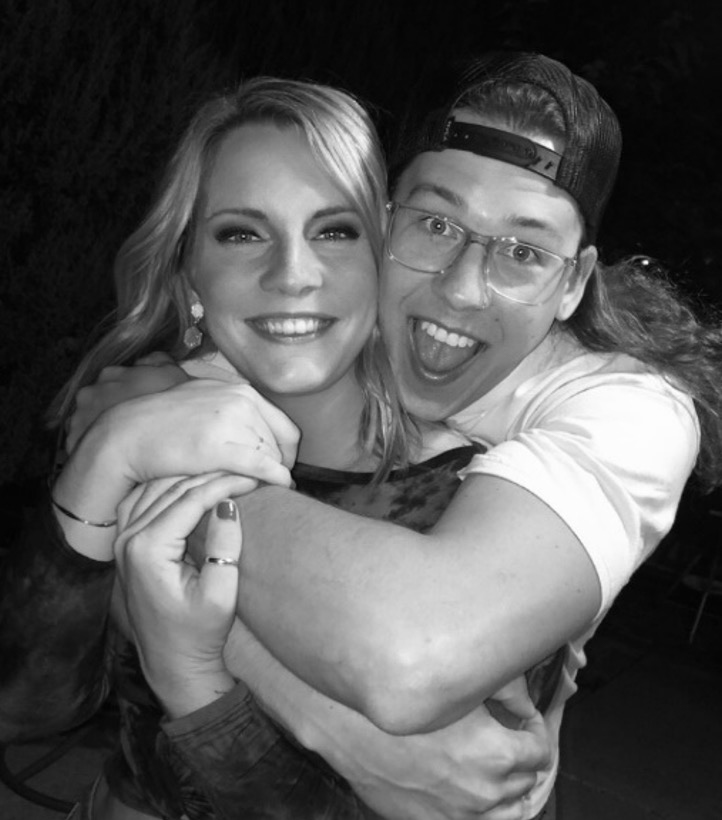 Scott and Hayley are both members of the Milwaukee Hurling Club and knew of each other for a couple years but neither had worked up the courage to really break the ice. Scott finally made the first move by sending a witty text after seeing Hayley’s profile on a dating site. After a couple weeks of talking, they went on a first date and the rest is history! Unfortunately, because of COVID, they haven’t played a hurling season as a couple but they always find it fun to look back and talk about their little interactions before they were together!

Jake and I met in 2012 playing this obscure sport nobody, including us, has never heard of! I am from Pennsylvania and Jake is from Wisconsin. He went to college in Duluth, MN and decided to live and work there after graduating in 2008, while I took a temporary assignment for work in the same town. I had just started playing Hurling in the Twin Cities with Twin Cities Robert Emmets Hurling Club (TCRE) and a teammate of mine informed me of a Duluth Hurling Club and suggested I go to their practices during the week. I showed up to their practice only to find Jake the solo player on the pitch, waiting for others to show up. Only one other person came to practice that day, and the three of us ran some drills. I later found out that Duluth Hurling Club was very new, and Jake and his friend, Matt, had just started it. Jake and Matt became two of my best friends while living, working and playing Hurling in Duluth. Jake and I ended up falling in love, marrying in 2014, moving to the Twin Cities shortly after and joining TCRE Hurling Club! We now have a 3 year old son, a 1 year old daughter and another son due in June. I play camogie and Jake plays hurling for the Junior B team and we have attended every National Tournament since we met with our kids in tow!

Thank God for this obscure, never-before-heard-of sport that helped us meet, fall in love and find community/extended family!

Patrick and Liz Kratz first met when they “just happened” to get paired together for drills at Liz’s first practice in 2009. Their first kiss was at the after party following TCRE’s Northstar Tournament in 2010. Hurling is one of their favorite shared interests and they’ve been to Nationals together every year since 2010. After getting married in 2013 and having two (soon to be three) kids together, they still play and practice together and love teaching the kids to puck around in the backyard during quarantine.

TCRE players have coined the phrase that we are “better than Match.com” because of all the couples that have come out of the co-ed league. Liz and Patrick have enjoyed seeing couples in the club fall in love, get married, and have children. There are several small children who run around each week on the sidelines, and a “village” of club members who take turns keeping the children occupied during games so that everyone gets time to play.

What has Central’s GDA, Colm Egan, been up to?

Seamus was diagnosed with Sports Induced Asthma (SIA) only 5 years ago but has important messages about managing his condition and playing at the highest level.

Seamus encourages all players to treat their condition and don’t get confined to the sidelines when a diagnosis and treatment can enable you to jump in and play.

More information can be found here and please don’t hesitate to contact your GP and work on a treatment plan.

Stay tuned- there will be plenty of new recordings coming this late winter, early spring.

Colm’s reminder: This is a perfect time to get Mom and Dad involved and try our Gaelic Sports in your back yard or local park.

Masita has officially launched their new site where you can design your own kit. Check it out at masita.ie and don’t miss out on this amazing offer that Masita is running until March 1st!